The perfect trail bike is like the perfect boiled egg, it doesn’t really exist. However, on paper at least, Beta’s 300 Xtrainer is about as close to a four minute soft-boiled egg as you’re likely to get. And there’s the rub, one man’s perfect chuckie egg is another man’s unappetising disaster. Personally I like my yolks soft and therefore the Beta suited me fine but reading some of the posts about Xtrainers on motorcycle forums had me wondering whether we were talking about the same bike. Comments about poor suspension, especially the forks, plus the need for more power are rife amongst motorcycling’s chattering classes. The only way to separate fact from fiction is to have a go on one – fortunately my mate John was able to oblige.

Beta have been making off road bikes for many years now and their excellent four stroke Alp trail bikes demonstrate the company understand the difference between a trail bike and an enduro bike. De-tuned enduro bikes do not make good trail bikes and a good trail bike needs to be designed from the ground up. John took delivery of a brand new 2018 Xtrainer a couple of weeks ago and was kind enough to let me borrow it for a brief test. The spec of John’s bike is slightly non standard with white 2017 bodywork fitted in preference to the current red plastics, he’s fitted a larger 11 litre tank supplied by tank specialist IMS and done away with the oil pump and oil reservoir so the bike now runs on petroil. These are all mods which get a thumbs up from me but not everyone would agree, particularly when it comes to the oil pump. I prefer the simplicity of premix but can appreciate not everyone wants to be involved with mental arithmetic and dispensing the correct quantity of oil when they stop for fuel. Because I’m familiar with running bikes on premix I don’t find it particularly bothersome.

Now the oil tank’s gone there’s loads of room under the seat for …err…carrying oil.

Riders who endorse premix will tell you that it’s better than a separate system because when the engine’s running you know it’s definitely getting oil. Whilst this is true I’m not sure oil pump failure is a likely scenario on a modern bike and therefore in isolation I don’t believe it’s a good enough reason to dump the pump. On the other hand, an aspect of the Beta’s standard lubrication set up I don’t like is a feature whereby the ECU automatically increases the quantity of oil reaching the engine should the engine warning light be activated. This is a strange default setting and I’m not sure what it hopes to achieve. It only came to light when John’s bike had a warning light issue due to a minor wiring fault and it started running rough. Upon learning what the fault was John decided to delete the oil pump and his local Beta dealer removed it using an approved kit. I’d have done the same because, being a card-carrying horse-drawn man, I don’t like technology making decisions for me. I’ll decide if my engine needs more oil thank you very much.

Large capacity 11 litre tank by IMS. If John hadn’t told me I wouldn’t have known it wasn’t stock . This should give a useful 120 mile range, maybe more.

So, what’s it like to ride Mister? My first impressions of the Beta were it could be very close to my idea of the perfect trail bike. For a start the Beta very nearly complies with all aspects of Dixon’s Law of the Three Hundreds, which is to say a good trail bike should weigh less than 100kg, have a range of more than 100 miles and should top 100 Kph comfortably. These three figures are very important. Forget massive power, huge suspension travel and monster brakes. In the real world of trail riding you need a bike which is easy to pick up after you’ve fallen off, won’t run out of fuel in the middle of nowhere and will cruise comfortably on the road so you can get to the next trail quickly and safely. Speaking of which, the Xtrainer’s stock gearing makes the engine feel busy at 40mph in top and by the time you get to 55mph it’s starting to feel decidedly strained. Don’t worry, this is down to the short (48T) final drive and knocking four or preferably six teeth off the rear sprocket should restore calm and order. The engine will certainly cope with it and because Beta have created such a torquey motor I’m confident it will easily pull a taller final drive and be capable of 60mph cruising. It’s even got an electric start, quite a feat from something in this weight bracket. A kickstart is available as an option. Personally I wouldn’t bother, if the electric start fails for whatever reason just bumpstart it down the nearest hill and sort it out when you get home.

Nice chunky dog bones on the rear linkage. Good to see Beta have opted for a robust design. I had a pair of these snap on my Ossa Explorer and it didn’t end happily.

Under-gearing of bikes by manufacturers seems commonplace nowadays and even here in hilly Shropshire where 3 in 1 inclines are commonplace it’s simply not necessary to have trials type gearing. All the Pamperas on my fleet run higher gearing and I’ve never heard anybody say they struggle on the hills. Beta have built such a strong and impressive motor it’s a shame they haven’t played to its strengths and geared it so it will cruise in a relaxed manner. It doesn’t really matter because it’s something which can be easily resolved by the owner. One characteristic I noticed on John’s bike was a mildly annoying high frequency vibration which could be felt through the pegs at medium to high rpm. It’s a strange vibration for a two stroke and felt more like the vibes high revving Jap fours often suffered from. Higher gearing would help minimise the tingle, the vibes may also diminish after a few miles have been put on the motor. I mention it more as an observation than a criticism and it wouldn’t put me off buying one.

The Beta comes with two engine maps, ostensibly one for rain and one for sunshine operated by a switch on the left hand bar. Don’t be misled by this rain and sun thing and be aware the two maps don’t necessarily provide the characteristics one might expect for these conditions. In the ‘rain’ setting the engine is configured for more low down torque. Paradoxically, this might not be the ideal solution in wet, slippery conditions. In ‘sun’ mode the low down power delivery is smoother and the engine revs more readily at the top end. Both maps are perfectly valid, but it’s important that owners should familiarise themselves with exactly what they do and use them appropriately. The engine also has an adjustable power valve although I’m told the manual warns you not adjust it. The engine has such a flexible and creamy power delivery I’d stick with Beta’s advice and leave well alone. 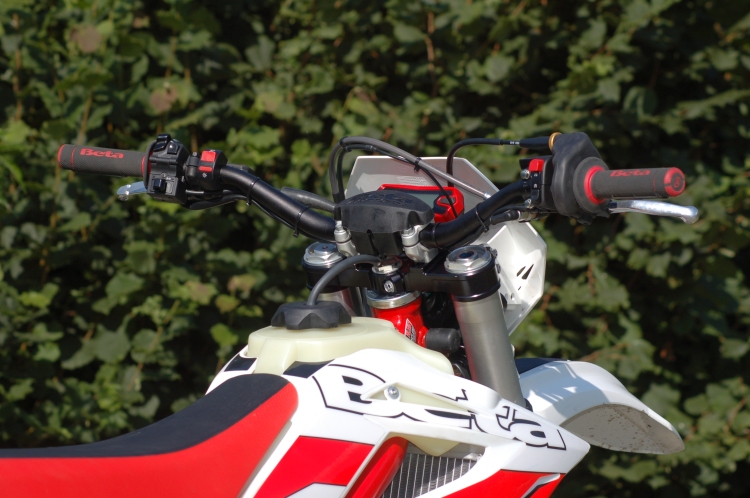 On the test bike I detected a very slight tendency to hunt at steady throttle openings, to be fair a lot of two strokes display this trait and it’s probably caused by a combination of ambitious port timing, aggressive expansion chamber design and the power valve. Most of the time it wouldn’t be noticeable and it would never manifest itself on the trail. I must confess I deliberately tried to provoke it by riding very steadily on tarmac. It’s easy enough to ride around by applying some positive throttle but I was kind of hoping Beta had eliminated this common two stroke characteristic. It’s not a Beta-specific problem and I’ve experienced the same thing on Huskys and Hondas.

Out on the trails I found the suspension perfectly acceptable for a trail bike, John bought his bike from Steve Plain Motorcycles in Llandrindod Wells and Steve had set the bike up for a 100kg rider. I’m a tad lighter and I found the suspension slightly firm and would prefer a softer set up but bear in mind my riding style is relaxed rather than ballistic. The Beta’s suspension doesn’t have the plush feel that a Honda or Kawasaki might have, but it does feel nicely controlled and bike tracks nicely along rutted trails. It’s worth mentioning John rated Steve Plain’s after sales service and technical support very highly, something which is gratifying to hear nowadays. None of the suspension problems alluded to on certain forums manifested themselves during my admittedly brief test and for typical UK trail riding I don’t think the average rider will find the Beta wanting in the suspension department. 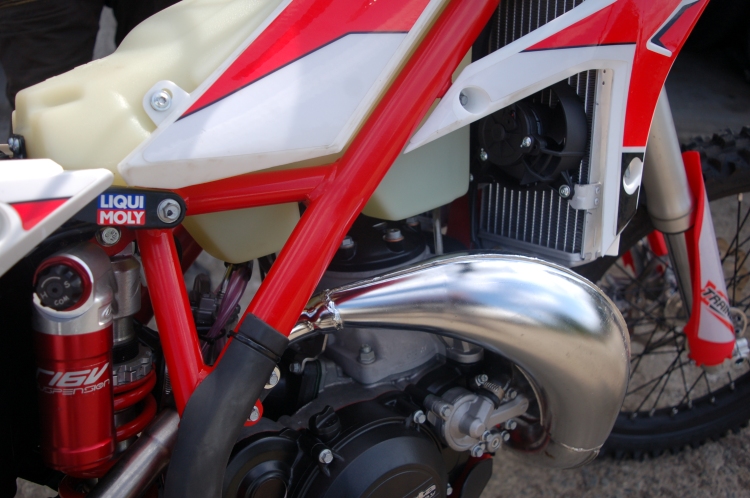 With the Xtrainer, Beta have created something of a classic and it’s a bike which comes very close to ticking all the boxes for my particular kind of trail riding. In fact, the only thing I don’t like about the bike (apart from the gearing) is the name. Apart from the daft moniker it’s a good looking bike which sounds great and goes very well indeed. The muscular engine with its easily accessible power is an absolute delight and will put a smile on your face every time you ride it. If you’re looking for a sensible, well made trail bike capable of covering reasonably substantial distances over mixed terrain and tarmac the Beta could be the bike for you. If however, you’re looking for something extreme to blast along rutted trails at improbable speeds I’d suggest looking at one of Beta’s excellent enduro bikes and whilst you’re at it, get yourself a competition licence.

And one last thought… riders who are ideologically opposed to two strokes might find themselves converted to stink wheels after riding the Beta, the engine’s linear torque, refined delivery and absence of a power band makes it feel more like a big four-stroke single than a 300cc stroker.