The Cota based 4Ride is a Honda Montesa collaboration which can trace its roots back to the Cota 4RT introduced in 2005. The 4RT followed on from the earlier success of the 315R which had been so successful in the hands of Dougie Lampkin . The Montesa Honda connection goes back to the 1980s when Honda bought shares in Montesa in an effort to use the Spanish firm to establish a manufacturing base for their commuter models to help Honda bypass EU import tariffs.

The 4 Ride in its natural habitat.

The 4 Ride is Montesa’s take on what is a newly emerging sector of the dirt bike market. It’s such an arcane and sparsely populated sector it doesn’t even have a name and so I’ll give it one: let’s call it the extreme play bike market or EPB for short. EPBs are trials bike based machines which have been modified to provide somewhere to sit and given an increase in fuel capacity. The result are bikes which can climb trees and rocks almost as well as their pure bred siblings but have enough range and comfort to enable the rider to explore a (little) bit further afield. The concept was created by Gas Gas (another Spanish firm) who introduced the TXT trials based Pampera 320 MK1 in 1998. Other examples of EPBs would be Ossas ill fated 280i Explorer, Scorpa’s 250 Long Ride and, to a lesser extent Sherco’s excellent 290 X Ride.

The grandaddy of them all. Gas Gas Pampera 320 MK1, the original EPB.

My mate John Strange very generously let me have a test on his brand new bike, I’d like to say John tossed me the keys and said enjoy yourself but the Montesa doesn’t actually have a key, and therein lies the first clue to its competition bike heritage. The other clue is the weight: at 81kg the Montesa simply has to be based on a trials bike because nothing else in this sector could even come near. These close links with its trials bike sibling are a double edged sword for the Cota for they are the key to its outstanding off road ability but also the reason for its limitations in other areas.

The 4 Ride is amazingly light for a road legal four stroke 250 but looking around the bike it’s hard to detect how Montesa have kept the weight so low. The axles, including the swing arm appear to be solid rather than hollow and the fasteners don’t appear to be anything exotic. Beautiful yes, but exotic, no. I can only assume there are some fairly tricky alloys being used for some of the bike’s construction and I’m guessing there’s some clever stuff in the motor. Sochiro Honda was a metallurgist by trade and his technical legacy lives on in Honda’s designs today. It’s worth noting the motor only has five gears, which would help keep the weight down a bit, and has no battery or electric foot, which would help a lot. 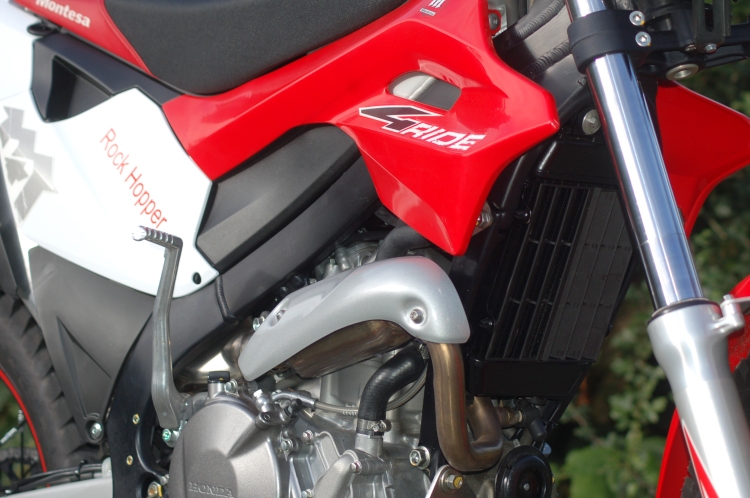 A masterpiece of packaging and all beautifully put together.

Climbing aboard, the 4 Ride felt tall and narrow. It’s a masterpiece of packaging, with all the bits harmonised into one ultra compact, homogenous mass. It fired up very easily on the kickstart and I set off eagerly down our lane in search of some trails to get a feel for the bike. Predictably it went through the gears very quickly and by the time I hit 45 mph in top the motor was already sounding quite busy. Honda have retained the Cota’s close ratio trials ‘box with the exception of top gear, which is taller in order make it a bit easier on the road. Gear ratios on EPBs is a bugbear with me: when building these bikes the manufacturers invariably keep the original trials ratios but the downside is it makes road work tedious because you rarely have the right gear for a given corner. Gas Gas bless ’em designed a completely fresh set of ratios for the Pampera and inserted them in the TXT motor which is one of the reasons the Pampera is such a great all rounder. If you’re making a trail bike, this is the proper way to do it. If you’re not going to be doing significant road miles then the 4Ride’s close ratio ‘box probably won’t bug you but harking back to my experiences with Ossa’s Explorer I found the close ratio ‘box spoiled the bike for long distance trail rides. 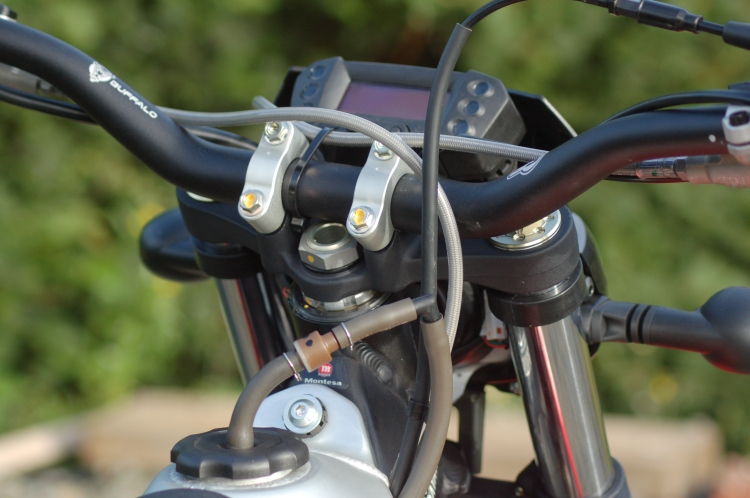 The bike is ultra short with a riding position optimised for standing on the pegs and the abbreviated, elevated gear lever tucked up out of harms way once again shows its competition bias, along with the aforementioned short gearing.  I’d be happier if the 4Ride had another 10mph available for cruising and for the type of trails we have around here raising the gearing to achieve this wouldn’t do any harm.

Earlier in the day when we were out riding together John’s bike ran out of fuel at a point where the two accompanying Pamperas still had a good forty miles range. OK, the Pamps are equipped with Acerbis auxiliary tanks but it still makes me think Montesa have been a tad over zealous on keeping everything pared right down to save weight. Let’s face it,  if you’ve always got to carry a couple of kilos of spare fuel around with you the obsessive weight saving becomes a bit of a flawed concept. Somehow John had managed to fit a 1500cc container of fuel under the seat. I don’t know of any other dirt bike which could accomodate such a large object under the seat and it makes you wonder why the factory didn’t just fit a bigger tank to start with. I think 7 litres fuel capacity is an absolute minumum on a trail bike and preferably it should be 9 or 10 litres.

The engine is a peach but given Honda’s pedigree in this area I’d have been surprised if it wasn’t. Smooth and torquey with bags of instantly available grunt. No issues here. 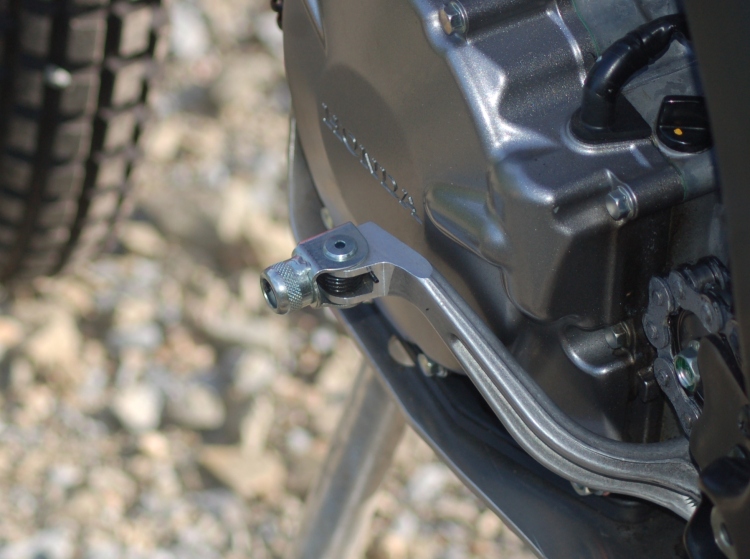 The 4Ride is not a comfortable bike for a long trail ride although I suspect John might disagree – he rides a Harley Bobber with the thinnest seat I’ve ever seen and so he likened the Montesa’s seat to being in a big comfy arm chair. Very few dirt bikes have comfy perches nowadays but the Honda is definitely at the less comfy end of the spectrum along with all the other EPBs. 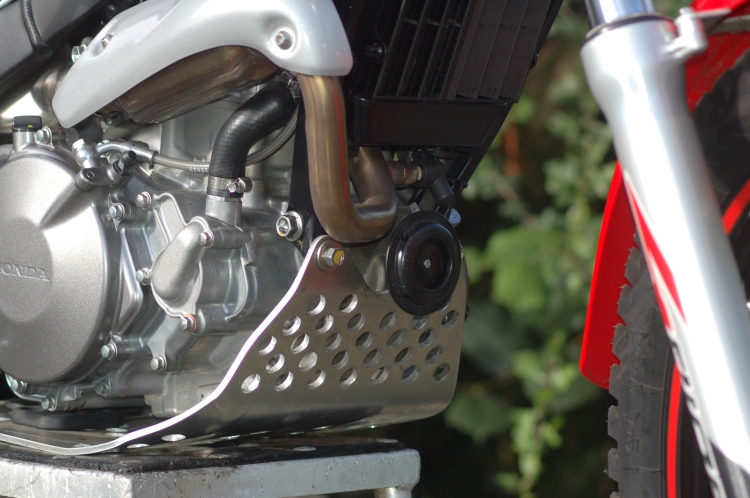 This was the only bit of daft design I could find anywhereon the bike. I’ll give that horn a life expectancy of about 3 months.

So, would I recommend the 4 Ride? Well, yes and no: it all depends on what you want to do with it. The Montesa is very focused and extremely capable, so much so very few owners would be able to exploit the limitations of its agility, I know I certainly couldn’t. It would make a fantastic LDT (long distance trials) bike but anybody who fancies competing on one in the UK should acquaint themselves with the ACU regs because I suspect the bike is a tad short for the trail bike class. I seem to recall the ACU insist a trail bike should have a wheelbase of at least 1350 mm, the Montesa is 1333mm and therefore you’d be lumped in with pukka trials irons rather than the trail bikes. Same goes for the tank, the ACU insist on a 5 litre capacity and the Montesa falls short at 4.4. This lack of compliance with ACU regs is one of the reasons I used the word ‘play’ in my terminology. It’s too bulky for pure trials and not really comfy enough to do something like the Land’s End or Edinburgh Trials on therefore it has to be classed as play bike. 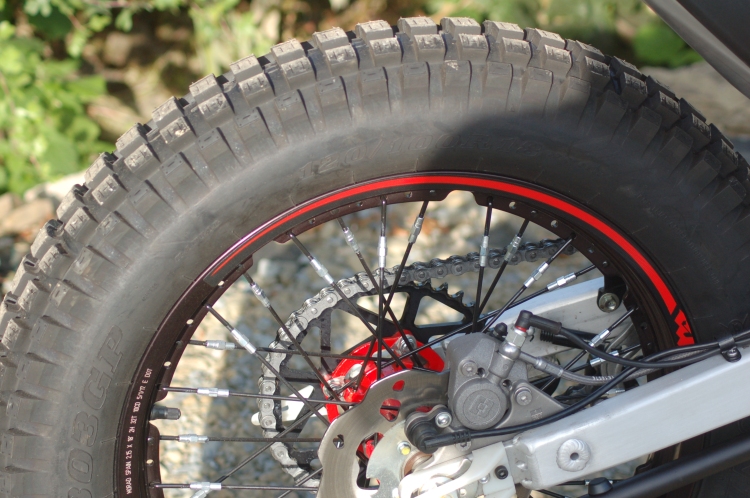 If you’re bag is riding tight technical trails simply for the hell of it then the 4 Ride is going to make you very happy, it will romp up tricky single track and make light work of rocks, boulders, in fact just about any hazard you care to tackle and make you look like Dougie Lampkin in the process. My caveat to prospective owners would be this: remember that in the UK this type of really challenging terrain is far and few between and you rarely come across it during a typical day’s trail riding. On fast open trails the bikes short wheelbase would make it very choppy to ride and after a few hours this could get tedious. If long days in the saddle isn’t really your thing and you’d prefer to practice riding skills in your local quarry or know a friendly farmer with a bit of woodland to play in then the 4Ride will be in its element. The build quality and exquisite design details mean it will also provide a lot of pleasure of ownership and I must confess I’d quite like to have one in my garage for those days when I just want to go out and have a plonk around, particularly in the winter when the going gets tough.

Honda’s advertising strapline for the 4 Ride is ‘Venture out and beyond your comfort zone’. I’m sure they’re referring to the type of terrain it will cover but they could just as well be referring to the rock hard seat and the 45 mile fuel range!  If however, you’ve already made your mind up you can live with the 4Ride’s compromises I think you’ll probably love it… 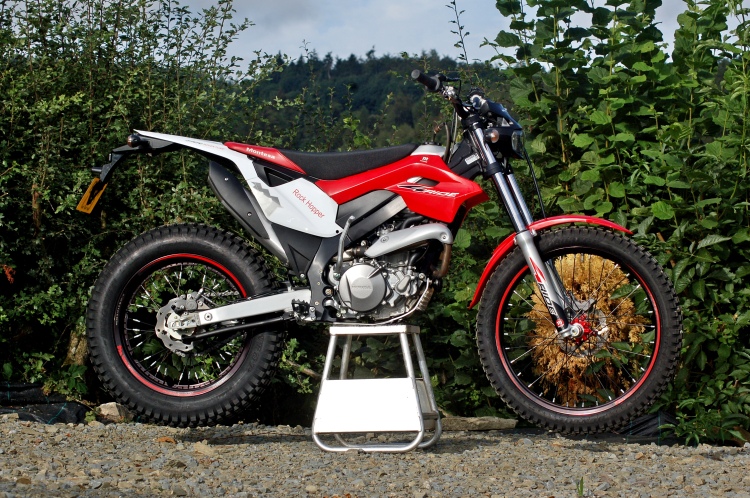