During the forty five years I’ve been riding bikes many of my favourite motorcycling memories seem to involve riding small capacity bikes around the sunnier parts of Europe. This week I’ve returned from Barcelona having spent two fantastic days riding in the mountains north of Barcelona with my pal Nick Tunstill from the trail riding specialists Catalan Adventure and it’s been a riding experience which is right up there with the best of them.

My first contact with Nick came after writing a short series of articles about UK trail riding for his magazine South East Biker (SEB). Nick’s mag is a lively, independent periodical which enjoys a loyal following amongst bikers in London and the south east. After I’d written the articles, Nick travelled up to Shropshire with his son Josh to explore the Welsh Marches with AdventureRide. Not so long after we had our ride Nick sold up in London, relocated to Spain and established a trail riding, equestrian and holiday accommodation business about two hours from Barcelona. I don’t claim any responsibility or credit for Nick’s radical lifestyle change but I’d like to think his day out in Shropshire might have helped sow the seed.

Nick contacted me earlier this year to suggest I come over and sample trail riding Catalan-style and so it came to be that myself and two riding buddies John and Dave, landed at Barcelona airport, picked up a hire car and and drove out to Nick’s operation just outside the town of Mora d’ Ebre. Nick’s house is off the beaten track and so he kindly met us at the local supermarket to show us the way back to his finca, a comfortable three bedroom apartment situated about 100 metres from his house.

The following morning Nick handed over three Honda CRF 250s and after a short briefing, John, Dave and myself and were following Nick as he threaded his way through the maze of tracks which network the surrounding area. The terrain around Mora is within the Terres de l’Ebre region (Lands of the Ebre) and is perfect trail riding country. It’s a wide, flat river valley surrounded by forests and mountains with what seems like endless trails leading off in all directions. Climbing steeply through a wooded area we emerged into a clearing high on a ridge dominated by the ancient chapel of Santa Magdalena, a one time refuge for hermits. From here we could see the expanse of the surrounding mountains and it was obvious we were going to be in for a spectacular couple of days riding. 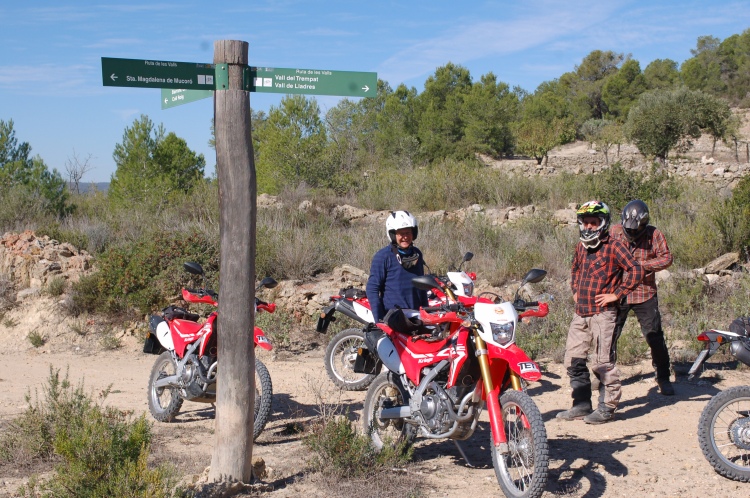 Dave, Nick and John stop for a quick breather at the junction of the Ruta de les Valls

The area is steeped in Catalan history and was a key strategic location during the Spanish Civil War, most notably a battle in 1938 subsequently known as the Battle of the River Ebro which became pivotal in General Franco establishing himself in Madrid as a dictator who went on to rule Spain until his death in 1975. Judging by the amount of flags supporting Catalan independence which were flying from many properties throughout the region it’s clear many of the locals are still engaged in political strife with Madrid.

The second day of riding was even more impressive and Nick led us up a series of a vertiginous mountain passes into the Serra de Cavalls, a mountain range with amazing views across the surrounding country. On one particularly high trail I noticed a swirling group of Egyptian Vultures circling just off to our right and at a similar elevation to us, not something you normally see from the saddle of a motorcycle!

For those riders familiar with UK trail riding, Spain offers a very different experience. For a start there are no gates, the trails are much longer than we are used to and fuel stops are far and few between. There is also a lack of rain and therefore mud. Choice of bike in this inhospitable terrain is important and reliability is key, bear in mind you can be a long way from civilisation should a problem occur. Nick has wisely chosen to use Honda’s CRF 250 as his weapon of choice: their frugal fuel consumption coupled with excellent all round ability makes them perfect for the Spanish mountains where a couple of hours on the trail might then be punctuated by a brisk 15 mile stretch on tarmac with scant prospect of passing a petrol station. The CRF excels at this kind of stuff where its soft nature combined with an ability to cruise at 60mph makes it an ideal tool for the job. They’re a bit heavier than some other trail bikes in this class but in this type of terrain it makes little difference. It’s all-round user-friendliness which matters and this is something Honda excel at.

The trails themselves are invariably wide, hard-packed and easy to negotiate, making Nick’s routes very suitable for newbies. We often encountered loose stones and gravel which at times felt like riding on marbles but this shouldn’t present a problem for prudent riders so long as caution is exercised, especially on elevated sections of the trails. However, enthusiastic riders would be well advised to take care on on some of the tight mountain hairpins because it can be a long way down if you get it wrong!

Overall the trails are great fun to ride and off-road novices with a sensible disposition need have no fears, none of the trails we rode on were technically challenging which is just as well because in such spectacular scenery it’s good to be able to take your eyes off the road and enjoy the view. Nick is an excellent guide and has amassed an impressive catalogue of local trails plus an excellent grasp of the history of the area and his commentary adds an interesting dimension to the rides. The area has a great deal to offer in terms of outdoor pursuits, history and culture. If you’re looking for a motorcycling holiday with an element of adventure and which won’t cost the earth I’m sure Nick will organise something suitable for you. Contact him at http://www.catalanadventure.com 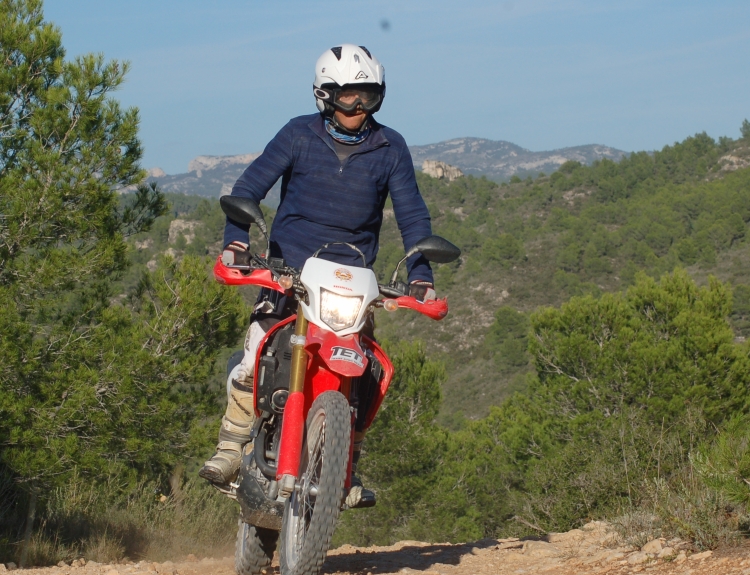