Pulling up behind the pale blue Moggie Traveler waiting at the lights in Church Stretton I couldn’t help noticing the lady driver’s titfer. It was one of those floppy jobs, turned up at the front like Yosemite Sam’s and co-ordinating well with her floral print summer dress. From my perch on the Pampera I could also see a carefully arranged tartan rug on the back seat and a large wicker basket prominently displayed in the luggage compartment. She was living the period dream. All that was missing from the ensemble was a large Victoria sponge cake on a willow pattern cake stand with a winners rosette  from the Women’s Institute garden party. Pulling in to Church Stretton petrol station I looked across to my riding companions Hugo and Lucas to see if they’d noticed the shooting brake and it’s driver. Of course they had. My chum Hugo has a particularly keen eye for detail and doesn’t miss a trick. He’s clocked the hat , the basket and of course the car. “ I wonder if she’s heading off somewhere to solve a mystery.”, he quipped, “Or perhaps she’s investigating a murder”. 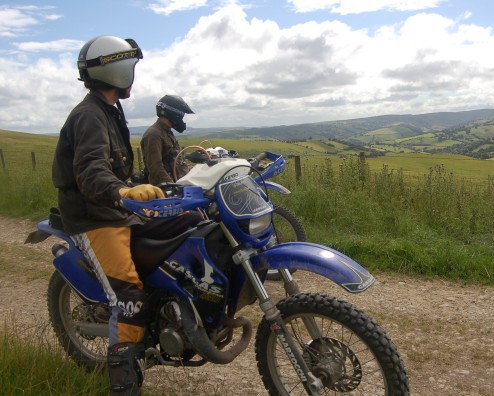 Out for the craic, Lucas and Hugo on Offa’s Dyke keeping a weather eye out for a Welsh invasion. Historians debate the significance of the Dyke and argue whether it was truly defensive or merely a willy- waving exercise by the King of Mercia. Whatever the motive behind the structure it makes a damn fine trail riding route.

It’s moments like these which sum up what riding with mates is all about and is a pleasure which , by and large , is denied car drivers. The banter is one of the things I really enjoy when out riding with mates. The very nature of the sport , given that we’re cocooned in lonely isolation most of the time inside our helmets, means when the opportunity occurs to communicate, your average group of bikers quickly turns into a garrulous, wise-cracking bunch of comics. The next thing you know everyone is laughing, usually at somebody’s expense.

Often my bookings are comprised of three or four riding buddies and the group dynamic is already well established. This invariably means there will be an opportunity for mirth at some point in the day. I had a group out a couple of weeks ago who were all seasoned, capable riders very familiar with each other’s strengths and, more to the point, weaknesses . Of course, they were ruthless Mickey-takers. One of the riders was an experienced and confident enduro rider who adopted the Alpha male role on the trail and generally showed a clean pair of heels to his mates. On one stretch of single track he took a tumble  caused by over enthusiastic riding and ended up sprawled across the track and blocking the route. His mates, instead of jumping off and helping him, immediately commenced sounding their horns impatiently as if they were in a Milan traffic jam. The fallen rider jumped back on and tore off down the track only to come to grief again 30 yards further on and the group immediately advanced aggressively towards him and whole noisy pantomime started again. It was one of those great unrehearsed comedy moments which can’t be scripted . Yep, I love the craic and due to the nature of trail riding with frequent stops for gates, accidents , fords, fuel and goodness knows what else the opportunity for banter is ever present. 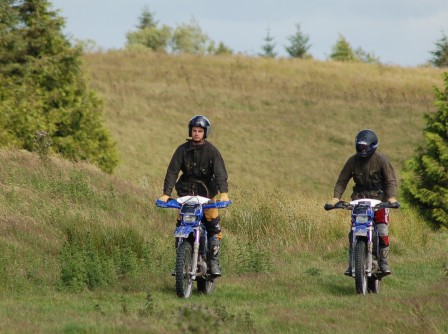 Lucas with Hugo bringing up the rear meandering along Mason’s Bank, a little known trail which rarely, if ever, sees a trail rider.

The AdventureRide week hasn’t all been about riding and laughter, there’s been some graft going on as well. A last minute opportunity to exhibit at the 2015 Llangollen Bike Fest presented itself and we had to hurriedly prepare a trade stand and man it for two days. It was exhausting but extremely rewarding and we met some old friends and hopefully persuaded a few new ones to come out with us. Here’s a few pics from the show.

Tumbleweed moment? Nah, just a quick pic taken on set up day prior to the show. Come Saturday folks were queuing round the block to visit the stand. On the other hand perhaps they were waiting for an autograph from Foggy… 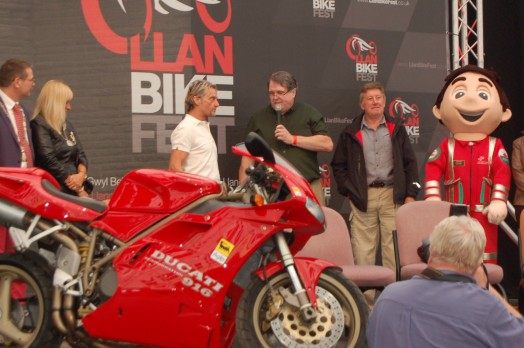 The new media friendly Foggy-Lite being interviewed. Foggy went down well with the crowds and proved there was always a nice guy lurking behind the race face. Meanwhile Mick Grant has the smug look of a man who has just discovered four Pontefract cakes he’d forgotten about in his jacket pocket .

As I grow older I’ve decided I quite like choppers, it’s one of my guilty secrets. This was a lovely replica of Captain America, Peter Fonda’s sickle in the iconic and somewhat confusing biker pic Easy Rider 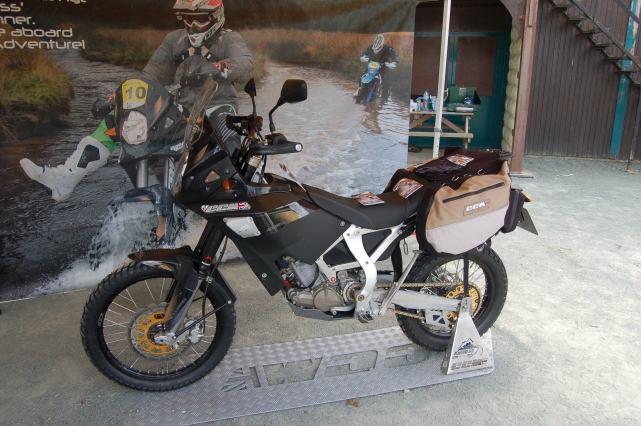 Great to see CCM making interesting bikes again. This is an intriguing bike which could create a new marketing niche in the form of lightweight adventure bikes.- long range bikes weighing circa 120kgs which can cut the mustard off road in the way a 200kg bike never will. The bike features a detuned BMW 450 which the enthusiastic CCM salesman assured me was proving reliable in service. Could be just what the market is looking for… I hope it’s a success for CCM, it was certainly a very popular exhibit at the show.