The Potsdam Giants were unusually tall soldiers employed by Frederick the Great during the Austro Prussian war. Nicknamed lange keris [long men] by the local population, the Potsdam Giants, if they still existed, might be the kind of target customer KTM had in mind when they created the Enduro 690 – rugged men of action with extremely long legs in a readily accessible sales territory.

According to statistics I’m an inch taller than the average UK male, exactly the same height as the average Austrian bloke and just an inch shorter than yer average German but I still can’t touch the ground on KTM’s mid-sized trail bike. And when I say I can’t touch the ground I really mean it. Sat on the saddle the tips of my size 10 trials boots dangle helplessly in mid air as if I’m astride one of those pantomime ostrich costumes.

Now then, having done my research into the average height of European males I discovered a man’s inside leg measurement usually equates to 45% of his overall height. I’ll ‘fess up at this point and admit my inside leg is closer to 40% , proportionally shorter than most but still long enough to cock a leg over just about any road bike and the majority of off road machines.The KTM’s seat is a full English yard above terra firma yet the typical German male, statistically one of Europe’s tallest races, has an average inside leg measurement of just 32”. Do the math, as they say. 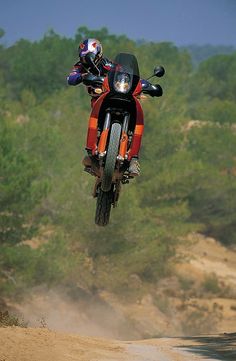 So, if it isn’t the Potsdam Giants, just who are KTM aiming the bike at? The Enduro I refer to belongs to my chum Rich who bought it new a couple of weeks ago. He’s a man with a keen eye for the aesthetic, an experienced road rider and is an outdoors enthusiast who wants to get into trail riding. With those credentials and at six feet tall he might just fit the profile of the ideal KTM 690 customer but even Rich can only just touch the floor when sat on his new bike. He tells me he will be buying a lowering kit for it. It’s a route a lot of riders go down nowadays and it begs the question why are manufacturers releasing bikes onto the market which need to be fundamentally altered to make them ridable by normal folk? Surely it would be more sensible to produce lower bikes by default and offer kits to raise the seat height should owners feel it necessary. I’d lay money there would be fewer owners raising the ride height of their bike than are currently having them lowered. 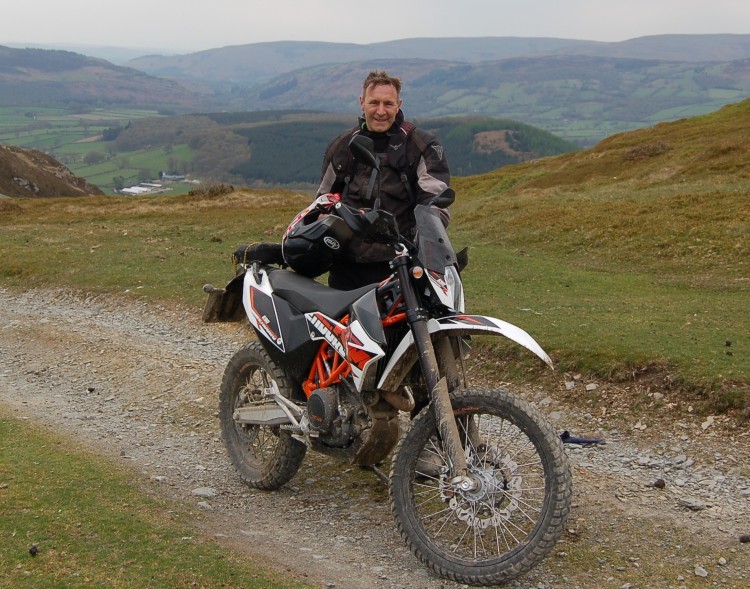 Tall, dark and handsome and the KTM’s not bad looking either. As you can see Rich ain’t no midget and yet he’s already looking for a lowering kit for his 690.

KTM are by no means the only manufacturer guilty of making bikes which are too tall for the average person. Most big manufacturers offer bikes for road as well as off-road use which feature unfeasibly high saddles. BMW started it with the G/S which was/is too tall for the average bod . And if you thought the production G/S was a bit lofty, consider this: in their final incarnation, BMW’s Paris Dakar race bikes had an auxiliary tank under the seat raising the saddle height to almost 40”.

Spare a thought for diminutive Belgian works rider Gaston Rahier having to muscle his vertiginous Beemer across the desert. Rahier was just 5’2” tall and his starting technique on the big G/S was to stand by the side of the bike, pop it in gear and take off whilst simultaneously standing on the left pot and cocking his right leg over the saddle. If you’ve ever seen old cowboy films depicting pony express riders setting off you’ll get the picture. Fortunately with 60 litres of gas on board Rahier didn’t have to stop very often but when he did, the Belgian dwarf as he was unkindly known, would make a beeline for the service vehicle and stop with his bike’s handlebars resting against the truck. It’s a choice not open to most trail riders. Modern production GS’s wisely offer lowered suspension and low seat options.

Gaston Rahier [centre] with BMW team mates. As you can see , the G/S is a little bit big for him. Respect to Rahier for grappling with that monster. Paris Dakar riders from that era were a very special breed

So why are modern dirt bikes so tall? Well, boxer motors aside, most modern dirt bikes are four stroke singles with relatively tall engine architecture. The current obsession with unnecessarily high ground clearances means engines are mounted high in the frame and the camshafts and throttle bodies occupy space traditionally taken up by the fuel tank. Certain manufacturers including KTM get around this by fitting ludicrously small fuel tanks amply demonstrated by their current 350 Freeride with its lamentable 5.5 litre fuel capacity. If I was being unkind I’d also say a small tank helps keep the quoted wet weight down. Now how did a trail bike with a such a meagre range ever make it past a design committee and into production? That said, plenty of riders find the tank range can be tolerated because the Freeride is such a sharp , competent bike. A lot depends where you want to ride such a bike, here in the Marches fuel stations are so far and few between a small tank really hobbles a trail bikes ability to strike out into the hinterland.

If there’s no space for a decent sized tank the next best option is to carry the fuel under the seat . It’s not a new idea, Honda did it with the Goldwing years ago. Stowing fuel under the saddle is tempting for manufacturers and makes a lot of sense from a packaging point of view. It helps centralise mass, which is usually a Good Thing. KTM  decided to go for an under the seat fuel tank on the 690 and therein lies the problem. They’ve produced a great trail bike with a reasonable range but unfortunately the location of the tank has raised the seat to such an extent you need to be a lange keris to ride it. It’s a great shame because it spoils what could be one of the truly great dual purpose bikes. It’s fast, grunty and light , beautifully made and not too expensive. If it wasn’t so damn tall I’d buy one myself. As it is, I’ll stick with my old 640 Adventure [complete with lowered suspension] until KTM et al wake up and start building bikes for normal people.