Kawasaki’s KDX 200 is like the Cliff Richard of trail bikes… it’s been around for years but never seems to grow old. From the year of its launch in 1980 the KDX trail/enduro bike was a big hit with customers. Initially it wasn’t a 200 at all, it was a 175 which in turn was based on Kawasaki’s 125cc air cooled moto crosser- the KDX 125. The bike I’m testing here is a 1990 KDX ‘E’ – a model which was launched 12 months earlier following a major update by Kawasaki, the most significant upgrade being the introduction of water cooling. 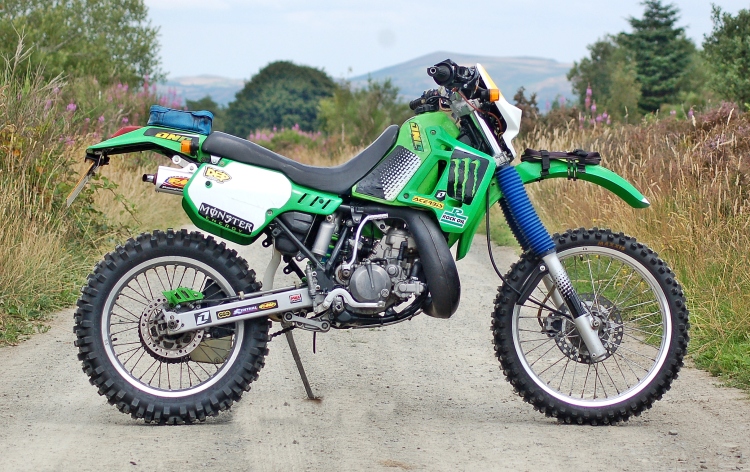 Handsome, compact and light. Kawasaki’s KDX 200 was way ahead of its time and a nice tidy one like this won’t disgrace itself in more modern company.

Many hard core KDX enthusiasts prefer the earlier models to these later water-cooled versions. Personally I’ve got no prior history with any of the KDX models and therefore have no axe to grind, I remember them back in the day and my general impression was they were similar in concept to Suzuki’s legendary PE175 Suzuki – a tough reliable trail bike which would also double as a credible enduro tool for clubmen.

This particular bike belongs to my mate Gary (who kindly provided the Fantic featured in the previous test). It’s low mileage Japanese market grey import supplied by DK in Stoke-on-Trent and Gary has slowly recommissioned it during the past 18 months. For our test we took it up to the Kerry Ridgeway on the Welsh border to a section of the trail which contains some wide open flowing sections with a bit of nadgery, rutted technical stuff thrown in for good measure. There were also some deserted tarmac lanes on which to assess its road manners. In other words, fairly typical UK trail riding terrain.

Kawasaki quote a 910mm seat height but on this bike the seat has been modified to lower it. Once settled on its suspension the KDX felt perfectly manageable and I’m sure I’d have been equally happy with a standard seat. It fired up first prod and was soon burbling nicely through its after market pipe ( the only deviation from standard spec). Back in the day Kawasaki claimed a dry weight of 102 kg for the KDX, commendably light for its class and only 1kg heavier than the air cooled bike. To me, it felt a bit heavier but I didn’t have the opportunity to weigh it and check. It certainly isn’t a porker and if you’re thinking about buying one I don’t think you’d be disappointed by the weight. 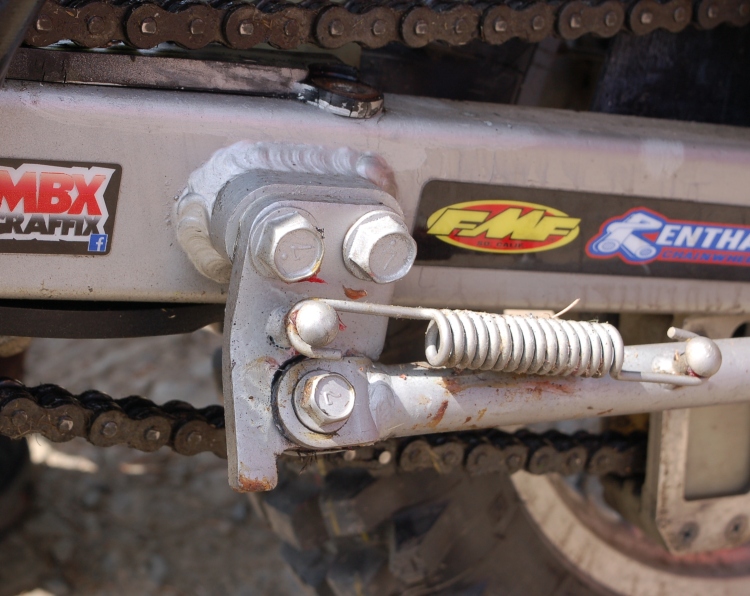 Never mind the quality feel the width. This is what a sidestand on a trail bike should look like.

Pulling away it felt perky and responsive with bags of midrange and good low end manners, with these characteristics it’s no wonder these were such a hit with clubmen back in the day. On the trails it behaved impeccably, plonking along readily in the intermediate gears. Kawasaki introduced a heavier crank on the KDX ‘E’ and this seems to work very really indeed making the bike really tractable and smooth – perfect for trail riding. 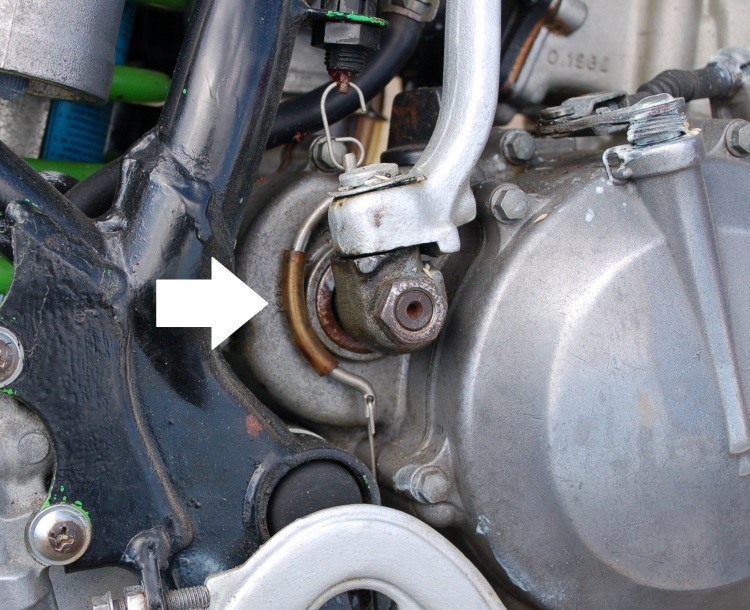 I love this. This is how Kawasaki’s engineers decided to get around the problem of routing the brake light switch pull around the kick start shaft . I can’t make my mind up whether its lateral-thinking genius or unecessary over-complication.

Having given the bike a good workout on the trails I decided to head off on along some tarmac to see what it felt like at cruising speeds. Out on the open road it seemed reluctant to get up on the pipe and pull wide open throttle. The after market pipe is an FM Powercore unit which is known to work well with these models therefore we can eliminate that from the inquiries. The bike hadn’t been ridden for many years and so it might just need a good old Italian tune up, ie a ten mile blast along a dual carriageway to clear its throat. The motor was very quiet and ran perfectly well in the mid range which makes me confident it was nothing serious, it might just be a sticking valve in the Kawasaki Integrated Powervalve System (KIPS for short). The KIPS is worthy of a mention, it’s a clever arrangement designed to maximise torque and controls the exhaust port whilst simultaneously altering the compression and ignition timing. Clever stuff. 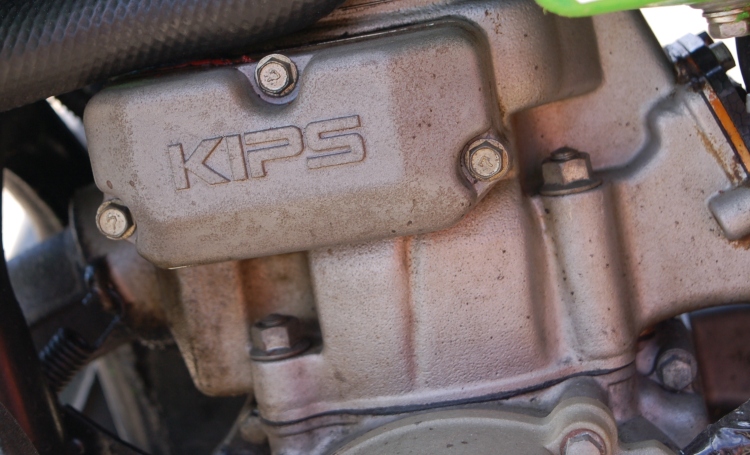 The brakes were less sharp than most modern riders are used to but personally I prefer soft brakes on a trail bike – brakes which will stand a bike on its nose are all very well until you come to a slippy downhill section. By far the most most impressive feature of the KDX was the suspension and it’s possibly the most comfortable off road bike I’ve ever ridden. Now bear in mind this is a 29 year old design and it could be forgiven if it felt a bit harsh or bottomed out occasionally but it didn’t, it just soaked up bumps with a wonderfully fluid, progressive action. I spend a lot of time in the saddle and I reckon on a long day’s trail ride you’d be hard pushed to find anything which works this well. The KDX may seem long in the tooth but in my opinion they make a viable all round trail bike even when pitched against more modern bikes. They’re light, simple, very easy to ride and solidly built. Another major plus is Kawasaki can still supply virtually any part for them at reasonable prices. What’s not to like?

Gary is selling this bike to make some room for his new Fantic, if you fancy a reliable modern classic give him a call on 07906 049340. 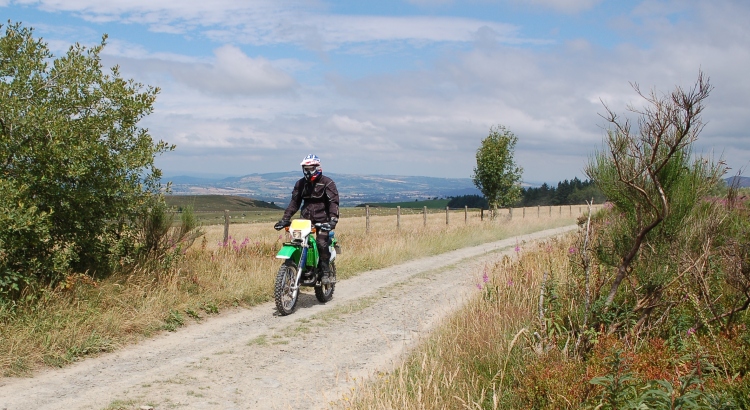 Gary riding the KDX along the Kerry Ridgeway. He’ll never hear his ‘phone ring with all that kit on…