At the risk of sounding  Luddite or a member of the Flat Earth Society I just don’t understand the growing trend among off-road enthusiasts to depend on GPS devices for navigation. Don’t get me wrong, I think Satnavs are fantastic devices. They’ll get you around the European road network quickly and efficiently, just bang in the destination postcode and off you go. But for trail riding? Nope, I just don’t get it.
One of the joys of organising a day out in the Great British countryside is the anticipation and planning. And for me, there are few greater pleasures in life than pouring a nice glass of red and poring over a 1:25,000 OS map planning a journey into the wild blue yonder.

I’m one of those fortunate people who can look at contour patterns and immediately visualise the surrounding terrain, it’s by no means a special or unusual skill but in my experience not everyone can do it. Once I’ve picked out a likely route I’ll scan the surrounding area of the map looking for points of interest potentially worthy of a diversion such as hill forts or Roman ruins. I’ll also be looking for signs of distinctive topography such as rocky outcrops, Trig points, woodland, rivers etc to use as sense-checks should we get lost. Can you do this on a 4” LCD screen? Not very easily. The spatial awareness provided by studying the wider picture of places you want to go is a key component in effective navigation.

On a more practical level the thought of being in the middle of nowhere with a dead Satnav battery or loss of GPS signal is also unappealing. I appreciate the loss of signal is rare nowadays but the fact remains you are relying upon someone / something else to guide you and if there’s one thing trail riding teaches you, it’s to be self sufficient. SYOSO as they say. By contrast, a paper map is absolutely 100% reliable. No moving parts or Lithium crystals y’see.

Without trying to be a smart-arse I recently posted a comment on a well known off-road forum asking for GPS advocates to summarise the key benefits of satellite-aided navigation over paper maps. It was a genuine request because I honestly believed I might be missing out on something. Aside from predictably stupid comments about non-technology users being in the Dark Ages the answers were as interesting as they were unconvincing. They ranged from being able to provide evidence against potential prosecution for Rights of Way infringements to having all the OS maps stored in a convenient handy-to-access device. Let me tell you, it’ll be a sad day when I start recording what I do in case I later need to refer to it in a court of law. Not only that but having instant access to a detailed map of Weymouth harbour when I’m lost somewhere in the Welsh Marches is of questionable benefit.
The other flaw in the GPS argument is the data being used to compile the routes is not necessarily infallible. To be fair, the same could be said of OS paper maps . Even the so-called definitive rights-of-way maps used by local authorities can be found wanting in providing reliable information. The only way around this is to get out there and do the ground work, speak to locals , carefully research routes and then get down to your local authority to check. I suspect this is the last thing the upcoming generation of young trail riders brought up on easy-to-access information and instant gratification want to hear but that’s the way it is. You still need to put the leg work in whether you’re all teched-up with a Garmin Geek-o-Matic Lone Ranger Tech Trail Gen 2. v8.5 or whether you choose to navigate by sextant and compass. It’s one of the things I love about trail riding. It ain’t easy and that’s what makes it so satisfying.

Touratch road book holder. OK , I admit it, I’m an analogue kind of a guy…

Years spent competing in long distance trials taught me the value of decent route notes transcribed into a crude short hand and loaded into a road book holder. A road book holder is a simple handlebar mounted device which basically contains a very long roll of paper upon which you put your notes. Expensive road book holders have a facility to scroll the notes by means of an electric motor. Being a horse-drawn man I favour a manual scrolling system [ie you turn a handle with your left hand] but the model I have does have the luxury of integral lighting, green l.e.d.s providing subtle diffused lighting, easy on the eyes and essential for night time navigation. For an event like the Land’s End Trail I would transcribe 350 miles/20 hours worth of route notes onto a 25′ roll of paper and expect to complete the event without a single navigational error. I reckon that’s a pretty good argument for the efficacy of paper maps and road books. My Touratech unit was very expensive [about £100] twenty years ago but it’s never let me down. It’s been crashed , bashed and even fully immersed in a river on one occasion but it’s still providing reliable service. All it needs to drive it is a map and a brain.

To me , a satnav is an unjustifiably complex version of a route book holder, better in some ways but flawed in others. It will augment a map but woe betide those who come to depend on them and eschew the paper map. One day your choice will bite you on the bum.
For the time being I think I’ll stick with what I’ve got. 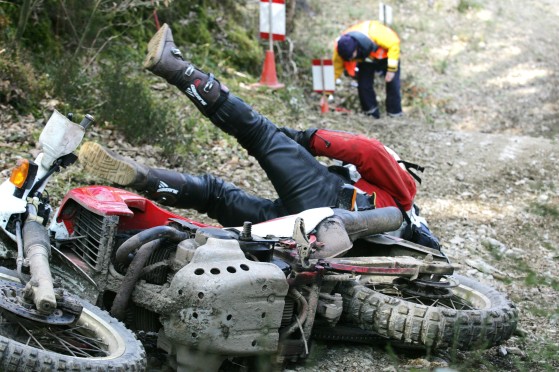 You won’t believe this but the road book holder stopped at exactly the same point on the route notes as where this crash occurred. Spooky.