Bless me Father for I have sinned, it’s been two months since my last post…

Has it really been over two months ? I’m afraid it has, In my defense things got really busy in November, so much so there was no time to compile a blog and then in December things went really quiet and there was nothing to write about. No such excuses today, no sir, because I’ve already done the first ride of 2015. Yesterday I met up with my chums Nick and Mike along with a few more TRF members and we blew the cobwebs away celebrating the new riding season by heading out for the recently re-opened Water Breaks Its Neck Neck. And yes, that is the correct name. But more of that later, in the meantime I’ll do a quick recap of 2014.

Initially I started the blog as an informal diary of trail riding in the UK because I wanted to share the experiences of riding in one of the best trail riding areas of the UK. The blog is hosted by WordPress and  a few days ago they sent over the site stats for 2014. Would you believe this blog now has readers in 64 countries? According to the stats the blog had it’s busiest day ever in December and I’d like to take this opportunity to thank everyone who takes the time to view it and for the kind comments some readers have sent in and hope you continue to enjoy reading about AdventureRide in 2015.

For me, 2014 will be memorable for the weather. We had an amazing run of good conditions here in the UK and this contributed to having some fantastic rides. Particularly enjoyable was the day out I  now refer to as the Landlord’s ride. Two local pub owners, Ian and Michelle booked a day out and we had a really grand day out.  Both have since made me very welcome in their respective pubs and it was after this ride that I felt I’d put down permanent roots in Shropshire. I’ve grown to really love this county, the locals are fantastic and have made me very welcome.

Publican Michelle smiling coyly at the camera, she might look shy and demure but let me warn you fellahs, she rides a full-house Cheney B50 for fun!

Another memorable day for me was the first time I deployed the whole fleet of newly acquired Pamperas. I think the only bike which gave any trouble that day was my new Ossa Exporer!  Speaking of which a lot of people have asked me what has become of the Ossa, well I’m afraid it’s now the subject of a legal dispute. It would be inappropriate to discuss it at this stage but hopefully I’ll have something positive to report next month. In contrast to the Ossa, the Pampera’s have without exception, been paragons of virtue. Businesses stand or fall on the ratio of good decisions to bad . So long as the good outweigh the bad  you’ve got half a chance of survival. Buying the Pamperas was one of the good decisions, buying the Ossa one of the more regrettable ones. Sad but true. I’ve now got five Pamperas and one Ossa so at the moment the smart/dumb ratio is looking quite good. I hope Gas Gas rethink the Pampera concept and re-introduce another 94kg trials bike- based trail bike. I’ve lost count of the amount of people who have come up to me and said ” I wish Gas Gas still made these things…”

Danny and the boys enjoying their day out. This was the first time we had the full compliment of four bikes out at once.

One of the most surprising things since starting AdventureRide has been the success of the solo days and the taster sessions. A lot of riders want to dip their toe into the trail riding water without being under the scrutiny of others and the taster sessions are an ideal way to do this . I’ve had a steady succession of riders coming out for half a day. These short sessions have been a very positive way to introduce people to the sport and we’ll certainly be continuing them in 2015.

This is Martin, a customer from Altrincham, firmly dipping his toe into the trail riding water.

And so, out with the old and in with the new. Yesterday was the first ride of the new season and quad-riding Nick took us out for one of his typically excellent days out.. It’s always a pleasure to ride with Nick because he rides at a good brisk pace but with great courtesy to other trail users coupled with common sense where hazards are concerned. This means we can cover a lot of ground safely. The group who met up yesterday were all excellent riders and save for the odd stepping-off on greasy ruts , the day passed without incident and all the difficult stuff ‘cleaned’ without a problem. It was great to ride Water Breaks It’s Neck, one of the classic Welsh trails which has been closed by a traffic regulation order for the past couple of years. Now re-opened the trail is in pretty good condition, albeit very slippery in places. As ever in this part of the world the views are stunning  and WBIN didn’t let us down . The rain which persisted all morning suddenly cleared and we were able to enjoy a short spell of weak wintery sunshine. Here’s a few pics to give a flavour of the day.

Nick in typical take-no-prisoners mode. He’s riding a 1000cc V twin Can-Am. Very impressive. I’d love to be able to carry an axe, a jerry can, a tow rope and set of bolt croppers with me when I go out riding! Be afraid, be very afraid. 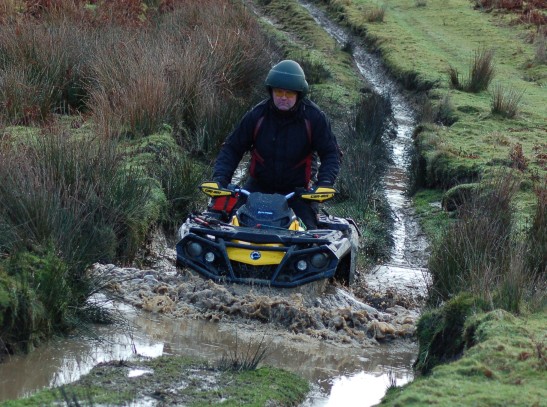 Trail riders have a sense of style not found in any other sport. Simon , Paul, Dave, Nick, Ian and Mike show off their sartorial elegance and take a well earned rest after a morning of hard trails and persistent rain. 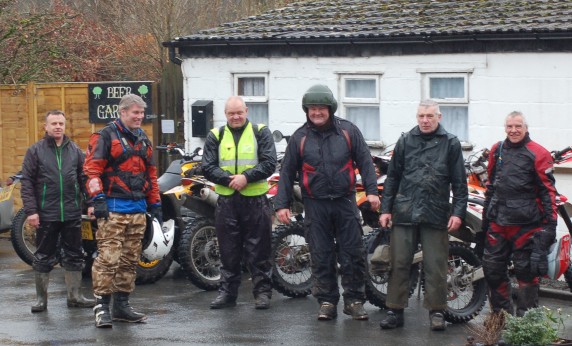 Open for business. Water Breaks It’s Neck. The trail is named after a local waterfall adjacent to the track.

How many trail riders does it take to change a light bulb? Nick, Ian and Mike extract Mike’s Husky from a deceptively deep rut on the notorious School Lane in Radnor.

You wait all day for a KTM and then two come along at once.

I’m not sure what Simon’s riding here. I can’t be certain but I think it’s an Airfix model of a Daimler Ferret scout car

Mike getting into deep water. I’ve seen Mike traverse some improbably deep ruts on numerous occasions and I’m convinced that Husky has a hidden snorkel.

So, here endeth the first post of 2015.  Ride safe and I hope you keep visiting the blog or, better still come out for an AdventureRide,     http://www.adventureride.co.uk

2 thoughts on “Happy New Year to all our readers!”