If you’ve never seen the iconic Bruce Brown film ‘On Any Sunday’ then I suggest you check it out. Be warned, it’s not the greatest motorcycle film ever made as some would have you believe. No , ‘On Any Sunday’ is simply a charming period piece which provides a fascinating snapshot of motorcycle sport in the USA at the beginning of the seventies. For anyone interested in classic bikes that should be recommendation enough. Spend a fiver and grab a copy on eBay.

Some might say the film stars Steve McQueen. It doesn’t. McQueen backed the film financially and makes an impressive appearance in the Elsinore Grand Prix sequence and shows he’s no mean rider in the desert race footage but the true star of the movie is motorcycling legend Malcolm Smith. In fact , if you buy the film I suggest you fast forward past the opening scenes , spare yourself the dreadfully cheesy theme music and go straight to the bit  about the Elsinore GP. I’ve watched this over and over again, mesmerised by the footage of Smith shot from a helicopter. And no, he wasn’t shot from a helicopter. I said Bruce Brown, not Bruce Willis.

The King of Cool , he’s in it but he ain’t the star. Mind you, the kid had talent. 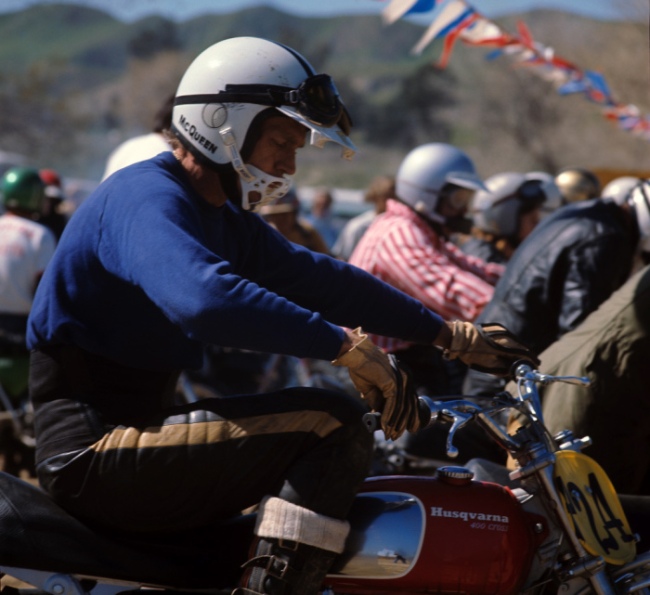 In the footage filmed from the chopper, Smith is leading the race, making his way past backmarkers as he proceeds to lap the majority of the field. Here you see a young guy at the top of his game showing everybody just how it should be done.  Scything effortlessly past groups of riders in his confident , fluid style Smith looks relaxed and composed . He’s also going  very fast indeed. In fact he’s scarily fast and incredibly smooth. Like watching Joey Dunlop on knobblies.

In a breathtaking display of riding technique Smith and his Husky are flying along in top gear, floating over ruts and obstacles in an unhurried, almost arrogant manner. Like most expert riders he makes it all look very easy, swapping lines and reading the track ahead. It’s riveting to watch and all rather surreal.  At one point he overtakes a long line of riders on the outside of a fast bend with a sheer drop of  over a hundred feet  just half a yard from his chosen line. He never hesitates or falters, he just keeps the throttle pinned  and sweeps past them in a long arcing curve as if he’s traveling in an entirely separate space-time continuum. And all the time he looks to be focusing 200 yards ahead, rapidly processing the incoming data and making the necessary adjustments to body position and line. It’s a masterclass in how to ride a dirt bike . He’s a class act, make no mistake.

As well as the Elsinore footage there are some great clips of him racing in the desert and also riding for the USA team in an ISDT, an event he competed in with great success on numerous occasions. It’s wonderful stuff capped off by the folksy, self-effacing modesty of Smith during his post race interviews where he comes across as a truly top bloke.  Don’t be fooled by the laid-back image though, he was and still is a formidable businessman . Behind that boy-next-door image lies a shrewd and clever man . Sales of Huskys doubled the following year and Smith was the main US dealer…

The Husqvarna he used during some of the filming is also pretty cool and worthy of mention, it’s also the main motive behind writing this particular blog entry . It’s a 400 Cross model fitted with the optional 8 speed ‘box. These weren’t truly 8 speed machines , they were actually 4 speeders fitted with a dual speed primary drive giving a high and low range. Husqvarna had painted themselves into a corner with their 250, 360 and 400cc versions of their engine . The gearbox casing could only accommodate 4 speeds and the Japanese competition was now coming equipped with a 5th gear as standard. This made them more effective in the high speed desert races which were growing in popularity at the time and in which Malcolm Smith became so pre-eminent. Husky weren’t in a position to redesign the gearbox at this stage and so an expedient measure had to be introduced ; the twin speed primary was the company’s answer. It was available as an option or as a retro fit kit [involving a complete engine strip including the pressed up crank assembly] before being dropped from production when the 5 speed motor was introduced in ’72.

These 8 speed Huskies are quite common in the US but are extremely rare in the UK. I was therefore quite surprised when motorcycle dealer Larry Preston-Smith of Unit 56 Motorcycles in Blockley, Gloucestershire generously offered to let me have a quick ride on one. The contact came about because I was writing a piece for Classic Bike about  a Krauser BMW and had arranged to borrow a standard R100RS from Larry as a comparison. Not only did Larry have a Husky but it just happened to be a US team bike which had been ridden to victory by Malcolm Smith in the Baja 1000 and Mexican 1000 desert races. Larry asked me if I’d like a quick spin on it when I came to collect the Beemer. Would I like a spin on one of Malcolm Smith’s bikes? Err, does the Pope defecate in the woods?

My mum had a Husqvarna sewing machine once, I wish she’d bought one of these instead. 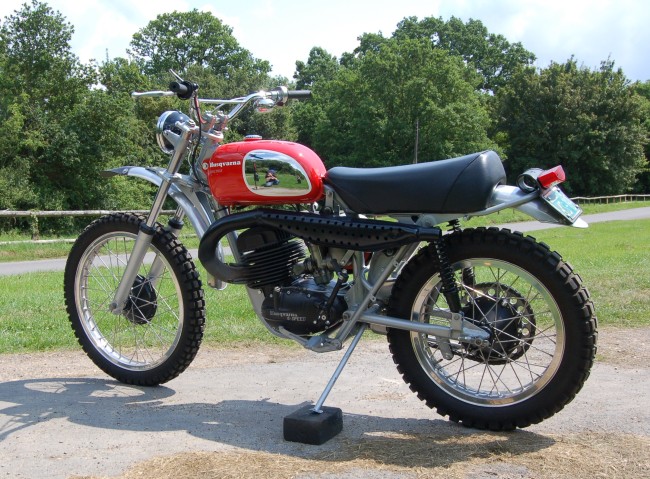 Fancy a go on this? Malcolm Smith about to show ’em how it’s done 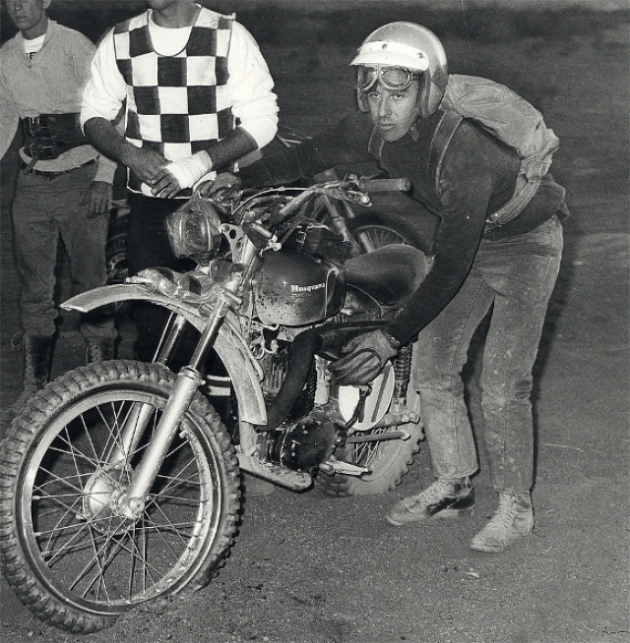 Larry’s 400 Cross is a peach and I was eager to have a quick blast.  First, let me dispel a myth about top level competition bikes. I’m fortunate to have ridden a few works bikes over the years [sadly though, not as a works rider!] and most of them are not the fire-breathing monsters you might imagine. A decent competition bike, be it for dirt or tarmac, has to be user-friendly especially if it’s to be used in endurance type events. Consequently, in my experience, decent race bikes will start easily and tick over if required, they usually have light clutches and throttles and they tend to work with rather than against you. It’s the performance potential  of such a machine which can be intimidating , not the bike itself. Larry’s Husky falls into this criteria. It’s beautifully restored, mechanically A1 and is properly screwed together.

That said, the Husky 400 Cross is basically an open-class, piston-ported motocross bike from an era when two strokes were starting to become very lairy indeed, therefore prudence when riding one would be advisable. Larry said the bike would easily pick up the front wheel  through the gears and I have no reason to doubt him but I wasn’t going to put it to the test. I’m hopeless at wheelies anyway. The crackle from the Husky’s pipe was certainly crisp and suggested an eager intent. Mindful of the bike’s value and the fact I was riding around a tight track on an industrial estate , I trundled around only  tentatively exploring the upper reaches of the throttle on a couple of occasions.

Cracking it up in third a few times was enough to convince me this is a very fine , seriously fast thoroughbred motorcycle and I’d love to give it a few big handfuls on a firetrail. A  long, very straight firetrail preferably. It’s a great looking piece of kit and, looking around the bike, the exquisite detailing reveals Husqvarna really knew how to build a winner.The brake and gear pedals look tiny, but they’re not, they’re just big enough. The bike has a purposeful simplicity about it and it looks as if it would be easy to fix in a hurry, handy if you’re in an ISDT or the middle of the Mojave desert.The smooth footpegs are a bit weird though and would be lethal in the wet. I suppose you don’t see much rain during on a desert race.

Tiny brake lever. If you start to hear the patter of tint feet it’s probably the little end on its way out. 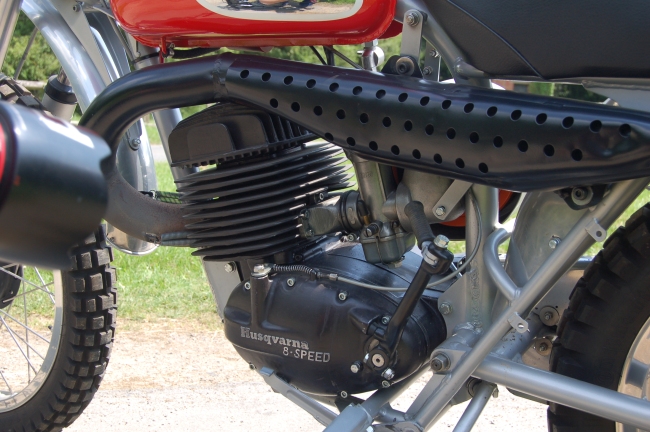 It’s a hackneyed phrase but this bike is a genuine piece of motorcycling history, backed up by letters to Larry from Malcolm Smith himself. I felt very privileged to be allowed to ride it and if you cross Larry’s palm with enough silver I believe he might part with it but with that provenance it ain’t gonna to be cheap.  Whether the bike was one of the machines used in the film is debatable but who knows?

Larry’s always got a mouthwatering selection of eclectic machinery for sale, have a look on his website http://www.unit56.co.uk  If you’re interested to see what Malcolm Smith’s up to nowadays go to http://www.malcolmsmith.com 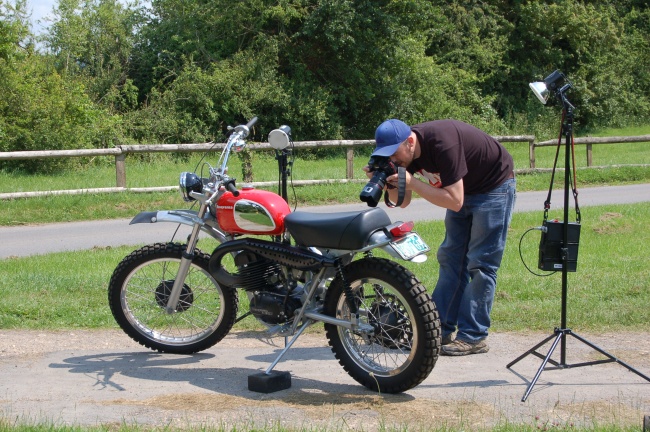 It’s a gen-yoo-wine Husky from the US of A.