At AdventureRide we usually go out riding two or three times a week during peak periods and after a while you get to know an area pretty well. Or so I thought. And that’s one of the great things about Shropshire , you see even though I’ve done some fairly intensive research on the highways and byways in the area it’s still possible to stumble across new routes not highlighted on any map.

Take the other day for instance, I’d spotted a byway on the map which could make a valuable contribution to one of the regular routes we ride. When researching lanes I usually go on foot. Ordnance Survey maps are by no means a definitive record of rights of way and just because the map implies a route is open and legal for vehicular traffic doesn’t necessarily mean it is. When researching rights of way I usually don my walking gear and take a camera and some binoculars [I’m also a keen birdwatcher].  If I encounter a farmer or property owner along the way I find they are generally more receptive to someone dressed unobtrusively with a pair of binoculars hung around their neck than they would be to someone riding an off road bike. When initially setting up the business I walked the entire hundred miles plus of the various off road sections we ride and introduced myself to locals where appropriate explaining exactly what I was doing. It’s paid dividends and I’ve received help and assistance from some surprising sources. A smile and a bit of honesty goes a long way.

But I digress. So there I was, walking this ancient lane clearly marked on the map as a right of way and for the first couple of miles it looked very promising but eventually signs of useage petered out and finally at the end of the lane where it met tarmac once I came across this piece of corrugated iron half buried blocking the lane. 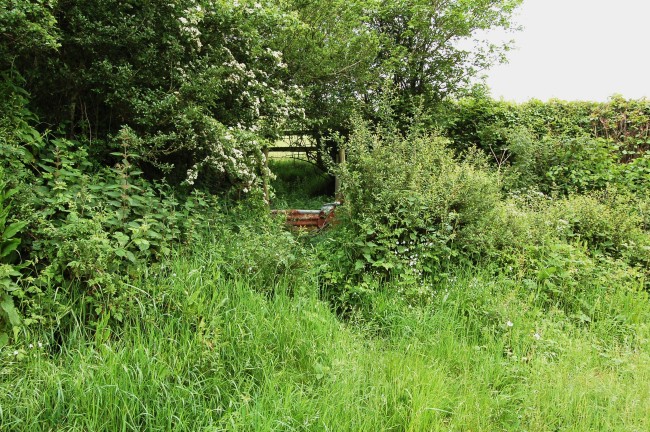 Now it would be quite easy to get indignant about this , remove the obstruction and proceed self-righteously along the lane. Is the corrugated iron a deliberate obstruction or is it simply a cheap and expedient measure installed by the local farmer to keep livestock from straying off a lane which hasn’t seen any vehicles for the past decade or more? I suspect it’s the latter. The first job is to establish whether it is indeed a right of way, if it is I’ll politely contact the farmer and ask if it would be OK to remove the obstruction. Anyway, the point of this blog isn’t to discuss this particular lane, what I wanted to tell you was when walking back to the car along a footpath I came across another ancient trail, not marked on the map. It’s a lovely old lane, flanked by an ancient hawthorn hedge, which runs along an escarpment occasionally offering beautiful views along the Vale of Montgomery. But the best thing about it is, it provides a valuable connection to other AdventureRide routes eliminating half an hour of riding on tarmac and replacing it with an interesting trail.

I’ve made discrete inquiries about the lane and nobody seems to have responsibility for it, in fact nobody seems to ever use it, it’s not marked as a footpath, or a bridleway or a road, it just provides a link to two very quiet tarmac lanes. On the basis that it’s always easier to beg forgiveness rather than ask permission this curious piece of Shropshire No Man’s Land is hereby officially included in the AdventureRide catalogue of trails. 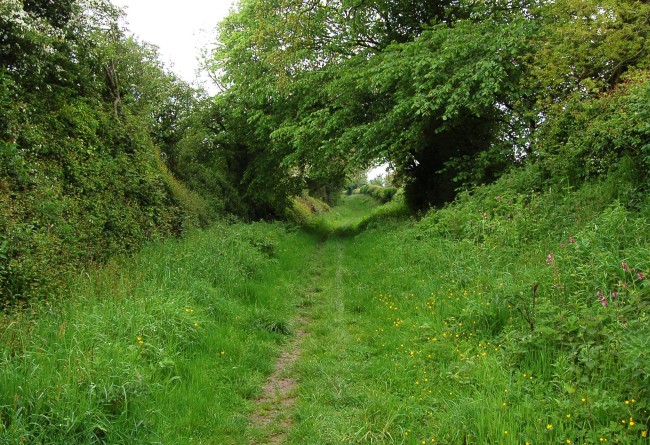 And now a final bit of news. I was delighted to welcome AdventureRide’s first female customers recently, Marion and Michelle. The girls booked separately and came out on different rides in the same week. It was a pleasure to see them both and was interesting because I’m receiving an increasing number of inquiries from female riders and I was keen to see how they both fared with the Pamperas.  Marion is a very experienced road rider but hadn’t ventured off road before whilst Michelle has her own vintage scrambles bike and is  more familiar with dirt bikes. Both days went very well and I hope to have them both back at some time in the future. 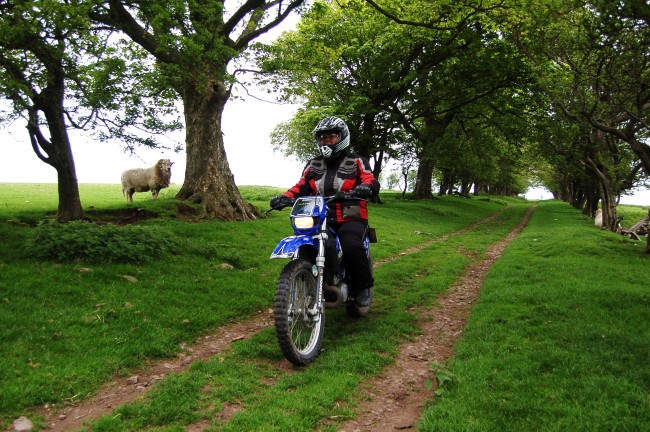