There’s no denying my Ossa Explorer leads a hard life. During the past eight days it’s clocked up 28  hours of off road use and covered about 360 miles of rocks , rivers , mud and hard packed fire trails. Here’s a quick snap of one of my customers out yesterday and you’ll see that the terrain we cover can be quite challenging 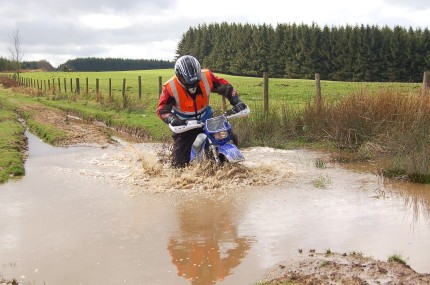 Despite the hard conditions the Gas Gas Pamperas cope with it day in day out with nothing more than routine maintenance , meanwhile the Ossa keeps dropping bits off . I nearly gave up on it last week when the side stand fell off along with an indicator. The indicator is a minor inconvenience , easily fixed , but the side stand dropping off could have been potentially quite dangerous. It’s also really, really inconvenient on a trail bike. 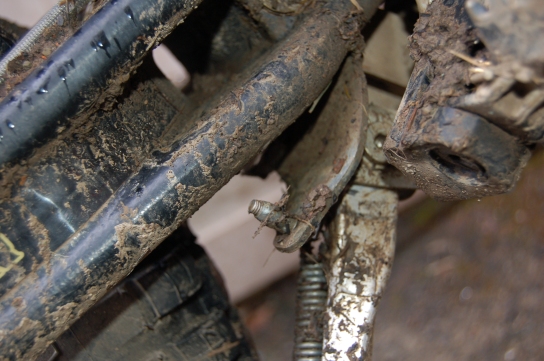 To compound the problems Ossa don’t seem particularly eager to offer any kind of support, the only response I’ve had to the various problems is to be told the broken mudguard isn’t covered by warranty. Mind you, there wasn’t a replacement mudguard  in the UK anyway so even if it was covered by warranty I wouldn’t have been able to get one. In fact I’m still waiting…

When the sidestand came away[ frustratingly, I’d warned Ossa this might happen but they didn’t respond] I decided I either needed to get rid of the bike or do something about it. I’ve got the Land’s End trial coming up next week , which is one of the reasons I bought the bike in the first place. Looking back, there is no way my Explorer would have had a cat-in-hell’s chance of successfully completing a long distance event like the Land’s End. It’s a 350 mile event which runs right through the night and a broken mudguard with the attendant loss of lights not to mention the inconvenience of a broken sidestand , leaking fuel filler would have been potential show stoppers.

As mentioned in a previous blog, the side stand itself is an impressively lightweight, forged alloy unit. Unfortunately it’s attached to the swing arm with three feeble M5 fasteners which screw into equally feeble Nutserts. You can see one of these Nutserts in the picture, still wrapped around the M5 fastener where it’s pulled itself out of the swing arm.

If I wait for an answer from Ossa, the bike won’t be ready in time for the trial and so I’ve had to deal with it myself . I opened out the swing arm mounting holes to accept a proper M8 fastener and then bedded the sidestand mounting plate on some epoxy and this, in conjunction with the M8 fasteners is now a Proper Job.

The mudguard was a bit harder to sort out. The problem lies with the fact that Ossa have designed a very attractive mudguard which would be fine and dandy but for the fact they then hang a heavy numberplate and rear light assembly right on the end with no additional support. It’s a flawed concept and the weight of the rear light bouncing around all day is just too much for the three flimsy fasteners Ossa have used to mount it.  To solve the problem I’ve fabricated a mudguard hoop out of some sturdy 8mm alloy bar which is secured to the underside of the mudguard. The hoop [which can’t be seen] runs into the underseat tool compartment and is secured to the seat rails effectively transferring the  load . It’s a quick and dirty fix and I’ll come up with a more elegant solution when [if] a replacement mudguard arrives.

I’ve asked Ossa to replace the various damaged parts under warranty but I’m not holding my breath.

Anyway, the upshot of this post is I’ve finally enjoyed two full days out on the bike and nothing has snapped, broken, become detached or rattled off. Oh joy,oh rapture.  I love riding the bike and I think Ossa have done some very clever thinking in creating it but, unless they start to listening and responding to their customers they’re going to have tough time gaining market acceptance for the Explorer. As a product it still feels too much like a work-in-progress project.

I’m looking forward to the Land’s End and I’m now confident the bike will complete the event. I’m waiting for some rubber mounted XT125 indicators to arrive  to replace the uselessly  brittle OE units and we should be road legal again and ready to go.

2 thoughts on “At last, some reliability.”