Apologies to Henry Williamson for the headline but I couldn’t resist it . You see, I’ve had the Explorer out  testing its river crossing ability. Some barely credible figures are quoted for the Explorer’s fording capability and I wanted to see for myself. We have a lot of fords hereabouts , most of which are quite swollen with the recent rainfall and therefore amphibious performance is currently high on the list of desirable attributes. It handled half a metre without complaint , more than enough for yours truly, especially when out riding alone and I’m prepared to accept the bike is perfectly capable of wading through 750mm of water, even if the pilot isn’t.

It’s been an exciting week with the bike, apart from getting it dirty [and wet] for the first time, I also took it to the Telford show [see previous blog post] where Nigel Birkett , the UK importer [www.ossauk.co.uk] , was kind enough to load the latest Explorer fuel map from Ossa. Time was when you could alter a bike’s fueling and ignition with no more than small screwdriver and a piece of foil out of a packet of Player’s No 6. Sadly, those days are  no longer with us…

Nigel quickly loads the new fuel map using nothing more than a laptop, many years of experience and a 165kg Laverda Atlas to provide the 12v power supply.

It all went fairly painlessly and the Ossa now has a crisper throttle response in the lower registers. Interestingly, Nigel informed me the ECU can be loaded with two fuel maps which can be accessed by a two position switch on the ‘bars, sold by Ossa as an option. Excessively high tech? Well not really, this means  you can have an alternative map which is slightly richer running to use on road sections in long distance trials . This could be very useful because I’ve entered the bike in the Land’s End trial in 8 weeks time during which the bike will cover about 350 miles and be ridden  non stop for 20 hours save for checkpoints and fuel stops. Having the ability to have crisp throttle response on the sections and a cooler running setting on the road at the flick of a switch  is the Holy Grail of two stroke trials riders.

How many men does it take to change a light bulb? Quite a few in this instance. Nigel patiently explains the subtle nuances of modern automotive engine management systems  to a pair of card-carrying Luddites. Actually Pete isn’t so much a Luddite, he’s more of a horse-drawn man. I’m scratching my chin in the classic manner of someone pretending to understand what’s being said to him. Try to imagine a speech bubble above my head with seagulls flying around in it and you’ll get the picture.

Anyway, the big question of the week must be “What’s the Ossa like then mister? Well , I’m delighted to say it’s off road performance on technical trails is nothing less than sensational. This should come as no surprise because  the Explorer is, after all, based on an extremely competitive  trials bike, the TR280i. It makes tackling technical trails so easy it almost takes the fun out of it and is so competent and  easy to ride it makes modestly capable riders look like they know what they’re doing. Like, er, me for instance…

As delivered, the Ossa is geared for trials with little concession to road use. The downside of this is the bike feels very fussy on the road and needs gearing up. Dramatically so in fact. This is easier said than done because stock aftermarket sprockets tend to err towards gearing down rather than up. At the moment I cannot foresee a situation where I could possibly use first gear on the Explorer. I’d already geared up to a 38T  on the rear and it still sounded stressed at 45mph. Yesterday the nice people at Talon came to the rescue and have sent me a Scorpa 36t sprocket [the Scorpa uses the same rear hub]. I’m betting the bike will still be under-geared [for what I want] and  suspect the answer will be a 12t front, currently unavailable from Ossa but potentially available as a special from Talon  http://www.talon-eng.co.uk .

This gearing issue isn’t something I’ve picked up on the web and I reckon this is because the markets the Explorer is aimed at such as mainland Europe and the US tend to have long,  single track technical trails and the stock gearing will be fine on these. Back in Blighty those type of trails are virtually non existent and we have shorter duration trails  connected by public roads. Roaming freely over the Picos or the Moab must be great but try doing that in Snowdonia or the Pennines and you’re likely to end up in serious trouble. Nope, us Brits need bikes which can cope with public roads and cruise at the speed necessary to maintain adequate progress and that ain’t 40 mph.

With some attention to gearing the bike could be nigh-on perfect for people like me who appreciate the subtlety of a trials-orientated bike rather than a long-travel enduro bike-based missile. I want something which will plonk unobtrusively around the green lanes, cruise at 55mph on the road, do 60mph at a push and be capable of handling the rigours of a long distance MotorCycling Club event [ see http://www.themotorcyclingclub.org.uk ]. The Gas Gas Pamperas on the Adventure Ride hire fleet will do all that and interestingly, Gas Gas fitted the Pamps with a set of ratios unique to the bike rather than crib the ‘box out of their trials bike.

With a bit of work I’m sure we’ll get there with the Explorer and first riding impressions have convinced me it’ll be worth the effort. 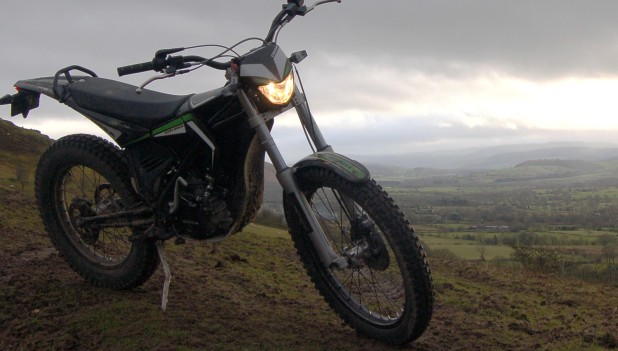 One thought on “Tarka the Ossa”