I came across this article whilst trawling through some stuff I’d written for Classic Bike last year. It’s an event report from the superb ISDT Centenary celebrations held in Carlisle last August. I’d entered the event on my Bultaco but due to space limitations and copy deadlines the report never made it to press which is a shame because there were some very interesting bikes and people at the event. So, a bit late perhaps , but here it is.

The centenary ISDT celebration in Carlisle had an appropriately international flavour with entrants from France, Germany, Holland, Scotland and Wales . They had turned out to celebrate the famous event by re-tracing riding the route of the original competitors who had set off from Carlisle almost exactly 100 years earlier. The anniversary celebrations were the brainchild of the irrepressible Dot and Jim Jones, well known personalities in the off road world. Dot and Jim had piggy-backed the Centenary ride onto a three day enduro hosted by Rallymoto and the paddock was packed full of exotic rally raid machinery sharing pit space with classic ISDT bikes dating from 1913 right up to the early 1980s. The organisers had won the enthusiastic support of Carlisle town council and riders were waved off by the Mayor of Carlisle as they threaded their way out of the town and headed out to the Lake District. Of course most of the original route is now tarmac but in on some of the more remote routes through the fells and on the occasional green lane riders were able to sample the scenery and roads experienced by the early pioneers of the International Six days Trial.

Local lad David Miller from Wigton brought along his 1913 Trump to represent the pioneering days of the ISDT. His heroic exploits on the Trump won the admiration of all who witnessed his take-no-prisoners riding style on the sporty looking V-twin. The Trump is direct drive, devoid of clutch or gears and with marginal brakes. If you stop, you stall and bump starting the long legged 980cc Jap sidevalve is a tricky business. Not such a problem on the wide open fell roads but definitely an issue when the centenary entrants passed through the places Keswick crowded with sightseers and weekend traffic. David’s technique was to maintain forward motion at all costs and his fearless filtering past slow moving traffic was a masterclass in how to ride vintage machinery . 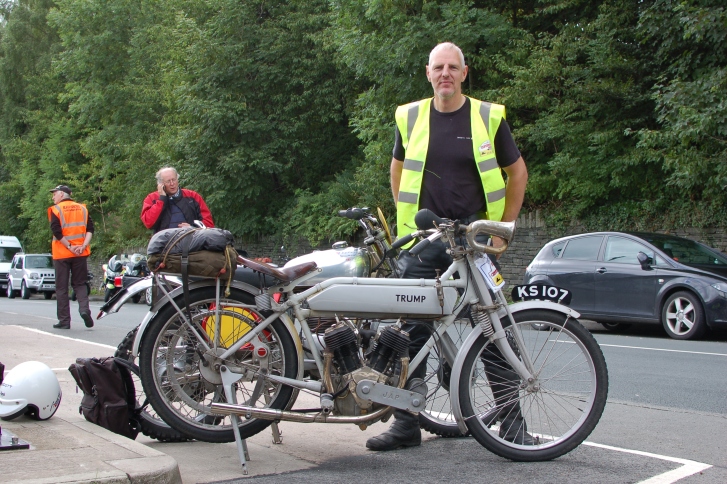 Works Jawas are like late night buses- you wait ages to see one and then three come along at once. Steve Gard had travelled up to Carlisle from London and brought with him three Jawa team bikes from the 1975 Isle of Man event including John May’s gold medal winning 250cc machine [number 3]. Steve’s machines represent the heyday of the Czech factories involvement in the ISDT and in their day these purposeful looking machines were in the elite of long distance competiton machinery. Steve is shown holding bike number 234, a 360cc, brother in law Nick Morris is with 228 which is a 350cc machine and Paul Howard is riding John May’s medal winning machine displaying its ISDT original number 3 .

Bob Ashwin from Evesham was riding his 1913 Campion. Powered by the ubiquitous 500cc JAP driving a 3 speed Sturmey Archer hub gear Bob’s bike also sports a cleverly fabricated hand cranked starting device which he made himself, “ It’s not an original unit but at least it’s Campionish, I’ve had the bike about 3 years and this year is the first time I’ve had it on the road and so far the experience has been trying”. Bob’s testing times with the Campion were to continue and sadly the bike threw its hand in a few miles from the start. Fortunately he has a trusty Royal Enfield rigid ready and waiting in the paddock and went on to complete the event. 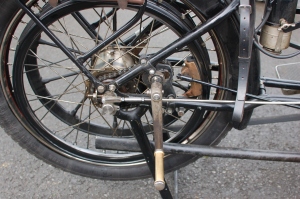 Frenchman Philippe Vandewalle’s superb SWM 370cc G/S1 was representing the hairy era of the ISDT when much emphasis was placed on the bike and rider’s performance in the motocross style special test. These big bore two strokes don’t suffer fools gladly and when asked about the performance of the Italian thoroughbred Philippe replied “ C’est fantastique, I’ve added a gasket to reduce the compression and the bike is superb to ride with good torque and an easy power delivery.”

Philippe, a well known competitor in the classic off road scene, runs the popular website www.oldknobblies.com devoted to classic enduro machines. He was taking it easy on the Centenary event having crashed the SWM in the previous day’s enduro sustaining a wrist injury.

There were nine original Cheney Triumphs on the event and this example , ridden by John Cart of Stratford ,was particularly good example sporting some interesting period features. “I’ve owned it for twenty years and when I originally bought it the bike had been used by its owner in one day trials. It’s got the original Cheney yokes and forks which are quite unusual and hard to find, in fact John Cheney spotted them and asked me if I wanted to sell the yokes! It’s also got a set of original Rickman hubs fitted. This particular bike wasn’t a team bike or anything like that, it’s just one of the bikes which were offered for sale at the time” An ex motocross man, John has used the Cheney in the Red Marley hillclimb and it shares his garage with a variety of Triumph twins including a 350 trials iron and a Tiger 100.

A number of the bikes on the event had genuine ISDT provenance and this nicely turned out AJS 16 MCS owned by Jeremy main of Oxford had participated in the event during its history. Jeremy bought the bike two years ago and hadn’t ridden the bike until the Centenary event. The competition version of Plumstead’s single was a popular clubmans mount in the 1950’s , the bike becoming popular after works rider Hugh Viney famously won the Scottish Six day three times in a row in the post war years. Jeremy seemed very pleased with the Plumstead single on its first outing and is pictured here at the final checkpoint of the day.

If you’re interested in ISDT stuff you really have to check out http://www.speedtracktales.com  It’s an incredibly comprehensive archive of ISDT material , superbly written and extremely well laid out. If you need to check any facts or research any history regarding the ISDT this is the place to go. One of my favourite websites!